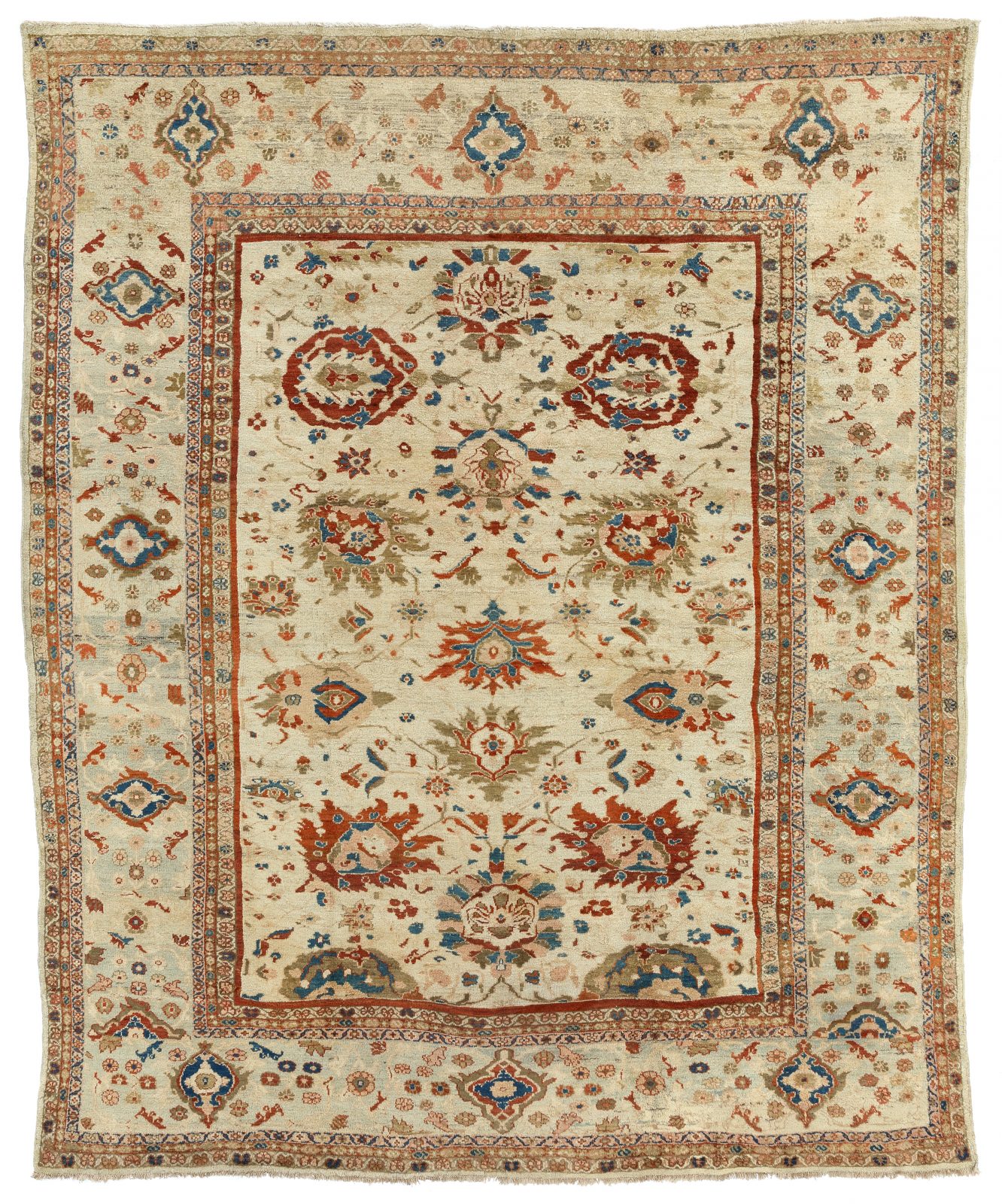 A masterpiece of weaving from the famous and world renowned Ziegler & Co workshop.  The rarest and most desirable type of Ziegler with an ivory wool background and ivory border.  In amazing order, with a luxurious soft wool pile throughout.  Minimal preservation/restoration on this exceptional and rare carpet.  With exquisite olive greens, muted reds, pale blue abrash (dye change) in the border, this piece has everything you would look for in a decorative Ziegler.  A beautifully spaced open drawing of floral palmettes and subtle leaves.  A truly breathtaking example.

The history of Ziegler carpets: In 1883, Ziegler and Co, of Manchester, England established a Persian carpet manufacture in Sultanabad Persia, which employed designers from major western department stores such as B. Altman & Co of New York and Liberty, to modify 16th- and 17th-century Eastern designs for the more restrained western taste. Using highly developed dying techniques, and the best artisans from the region, the Ziegler Co created rugs with beautiful, all-over patterns and with softer palettes than their vibrant Persian counterparts.

Request a home visit to view this antique Ziegler carpet in situ.  We travel nationwide, helping private clients and interior designers as far as Scotland, Ireland and in Europe over the last 30 years.

Ziegler & Co a Manchester-based Swiss producer was a genius in creating the worlds most desirable and decorative carpets. Using wool from Manchester, UK he had workshops in Sultanabad and supplied Liberty and Harvey Nichols.  Ziegler & Co were instrumental in shaping how decorative carpets would be produced in Persia and what designs would be woven in Sultanabad for the next 50 years. The company’s designs were essentially Western versions of finer Persian designs,  their large scale floral designs and often enormous sizes were modified to the specifications of Western retailers.  Most of the Ziegler production was shipped to New York and London.

Ziegler rugs developed an almost immediate following, especially among early collectors, which included the Guinness family, who laid them in Elveden Hall, their Suffolk estate.

Ziegler & Co employed designers from major western department stores such as A B. Altman & Co of New York and Liberty, to modify 16th- and 17th-century Eastern designs for the more restrained western taste. Using highly developed dying techniques, and the best artisans from the region, the Ziegler Co created rugs with decorative all-over patterns and with softer palettes than their vibrant Persian counterparts.  Taking the small intricate patterns of finer Persian carpets and enlarging the floral motifs to use on these Ziegler’s.  Their following and popularity with the best interior designers throughout the world has seen them stay at the top of the industry since they were produced.

We have found more carpets like "Rarest Antique Ziegler carpet"