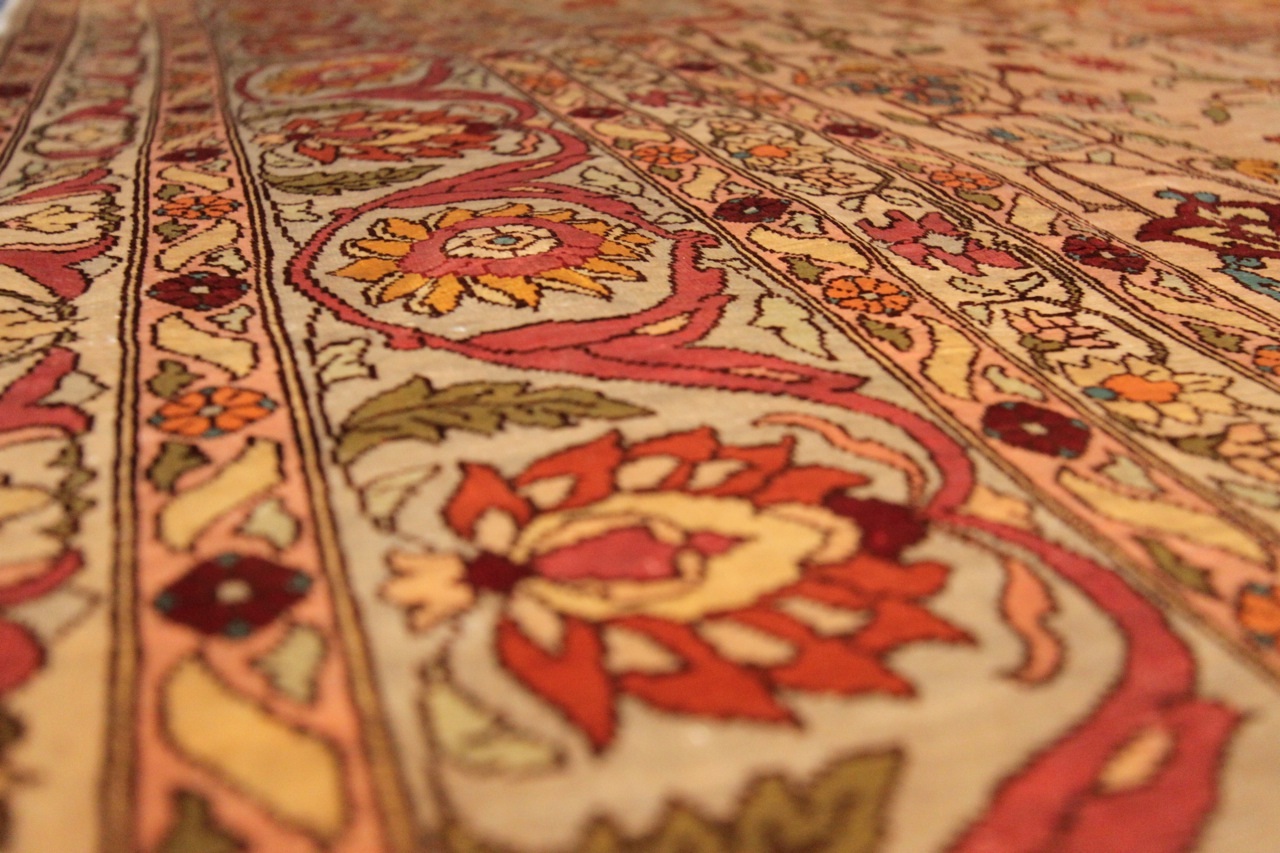 Only during the past century have oriental rugs become valued throughout the world as works of art. Collectors often justify their attraction to these handcrafted oriental rugs by explaining that they wish to own a small piece of the rich and colourful history behind this art form. The works have the ability to transform interiors into extraordinary spaces. It remains unknown exactly at what point in time the first carpets were woven, but it is certain that the nomadic tribes of central Asia began the technique of knotting carpets.

The rearing of sheep (the prime source of carpet wool) is a traditional nomad occupation and because people of this period had to endure extreme cold, it is certain that the craft of weaving developed to replace the use of rough animal skins for warmth. For the nomad, rugs were both decorative and practical, serving as floor coverings and wall hangings, but also as curtains, door hangings and saddlebags. It was primarily through Italian merchants that Oriental rugs and carpets became recognised and valued in Europe. Venice established itself early as a major trading hub within the East. Venetians spread rugs along their narrow streets, hung the rugs from windows and used them to decorate their gondolas. By the early sixteenth century, fabulous carpets could be found in the great courts of Europe, including those of Catherine de’ Medici and Charles V. The Lord Chancellor of England, Cardinal Wolsey, is reported to have purchased sixty Turkish carpets from a Venetian dealer to furnish his palace at Hampton Court.

After the great exhibition of 1891 in Vienna, Western interest in Oriental rugs began to increase; Western importers began asking carpet-makers to modify dimensions, colour and design to satisfy the tastes in Europe and the Americas. 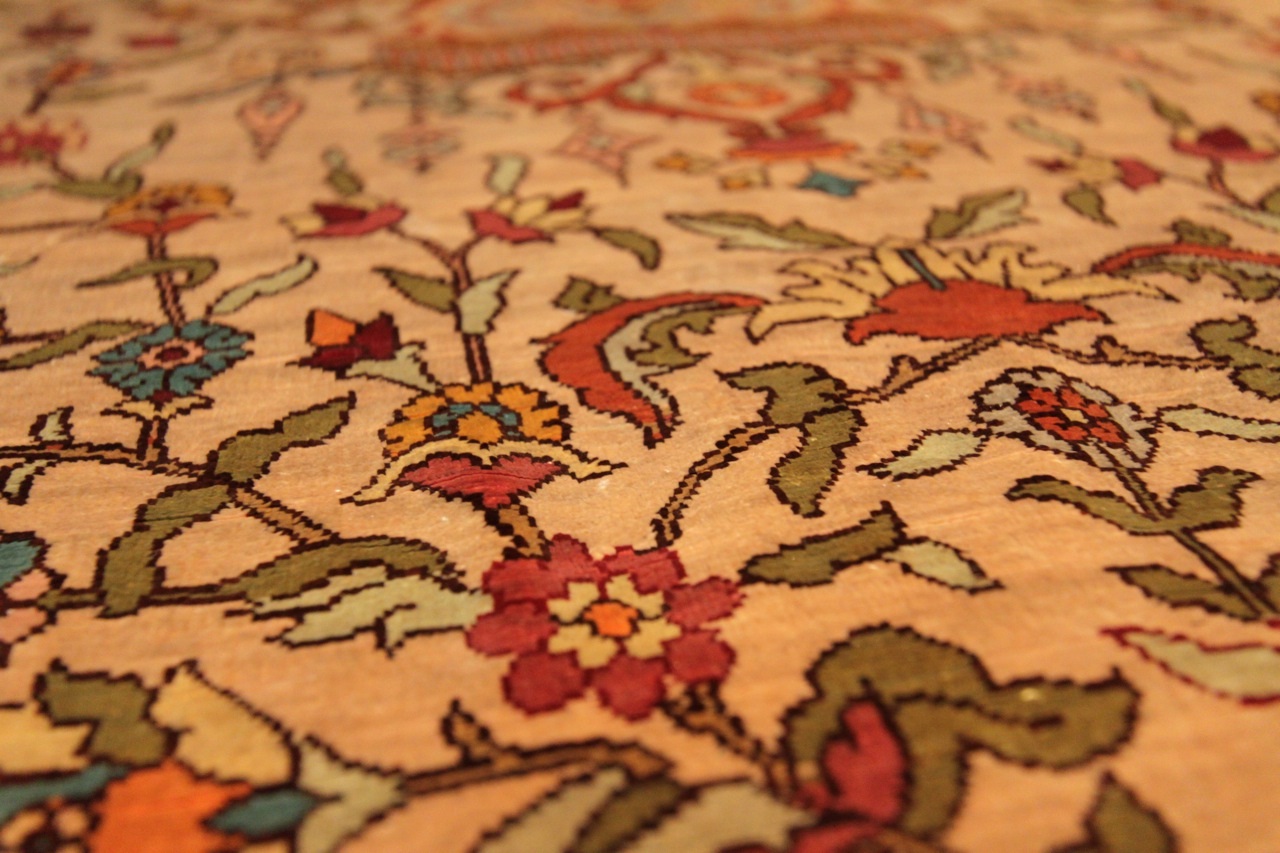 The basic principles and techniques of carpet weaving have changed little throughout their manufacture. The materials most commonly used to weave Oriental rugs are sheep and goat wool, cotton or silk. Wool quality depends on factors such as the animal’s breed and diet, local climate and the shearing season. Following the shearing, the weaving of a rug is performed on one of two loom types – vertical looms or horizontal looms. Vertical looms are primarily used to weave classical city carpets; they are constructed of either wood or metal and consist of two horizontal beams supported by rigid side pieces. Horizontal looms are the more primitive of the two loom types, typically used by nomadic people as their design allows for easy transportation.

The horizontal loom lies flat and close to the ground; it is staked down to the ground at the corners with two wooden beams tied at either end and the foundation is stretched between these two beams. Oriental rugs are either knotted (piled) or flat woven (kelim) or sometimes a combination of both, made to varying degrees of technical distinction using a variety of weaving techniques and materials. There are two fundamental styles of knots used to weave Oriental rugs, the Turkish knot (also called the Ghiordes or Symmetrical knot) and the Persian knot (the Senneh or Asymmetrical knot).

The decision to use one or the other of these knots in the rug-making process is a matter of tradition. With the Turkish knot the yarn is passed between two adjacent warps, brought back under one, wrapped around both (forming a collar), then pulled through the centre so that both ends emerge between the warps. 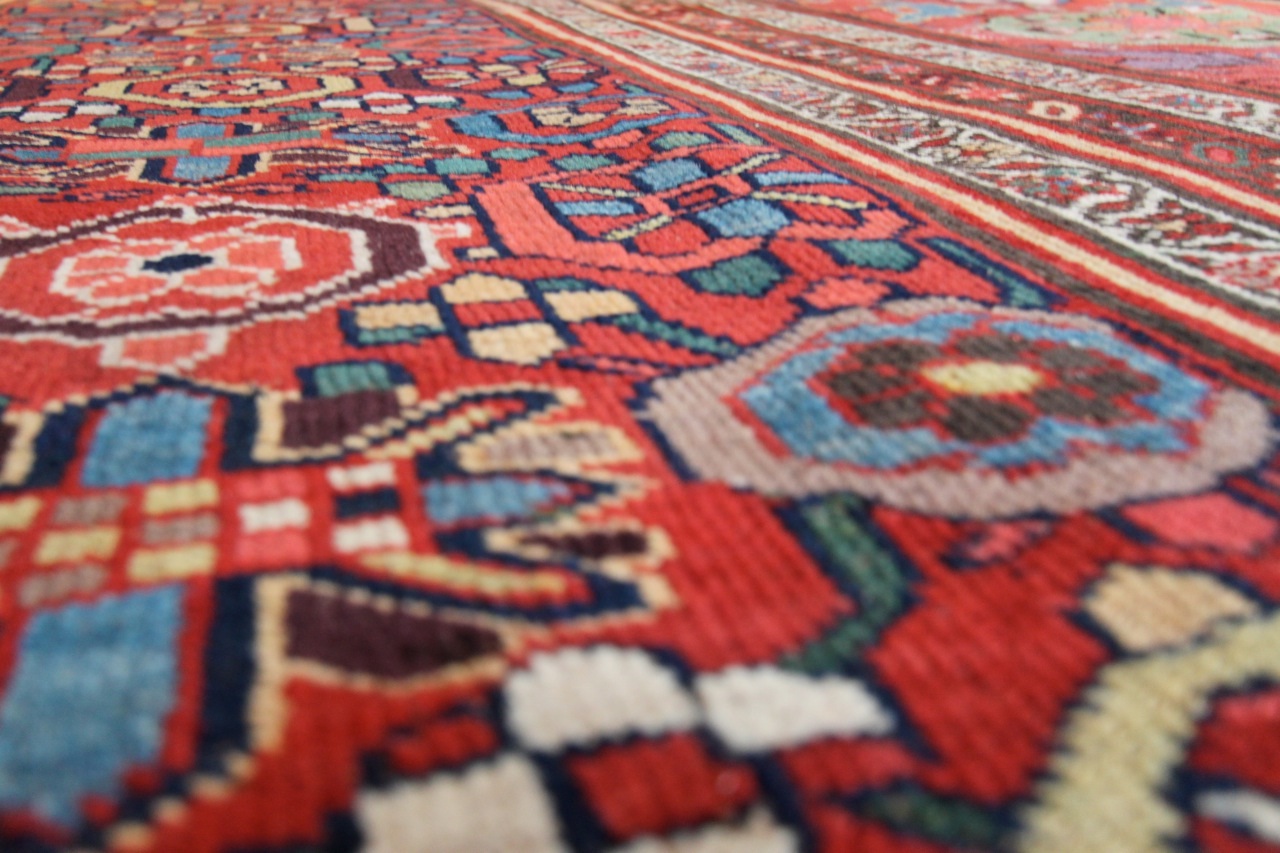 Alternatively, with the Persian knot, the yarn is wrapped around only one warp, and then passed behind the adjacent warp so that it divides the two ends of the yarn. The Persian knot may open on the left or the right. Rugs woven with this knot are generally more accurate and symmetrical. Other knots which can be used when making Oriental rugs include the Spanish knot (looped around single alternate warps so the ends are brought out on either side), and the Jufti knot which is tied around four warps. After each row of knots is completed, one or more weft threads are inserted and beaten down with a comb. The cutting of warps at both ends of the loom forms the fringe. For reinforcement, the sides, called the selvedge, are bound or overcast with yarn. The roughly cut pile is given a final shearing to create a uniform pile height. Finally, the rug is washed to eliminate dust and dirt that may have accumulated during weaving.

Carpets can be simplified into two groups of design, either geometric or floral. Furthermore, these two groups can then be placed into either town or tribal weavings, the finer pieces being woven in towns within large productions. A Serapi carpet is a perfect example of a small geometric town design. Woven in the middle to late nineteenth century, in north west Iran, these carpets are of typical design, the central medallion is surrounded by an open field which is bordered by a repeating palmette and vine border. These geometric designs, although not obviously so, are in fact floral motifs, woven in cross section from above. These geometric pieces were woven from memory and employed traditional motifs, which the weaver changed as the piece progressed 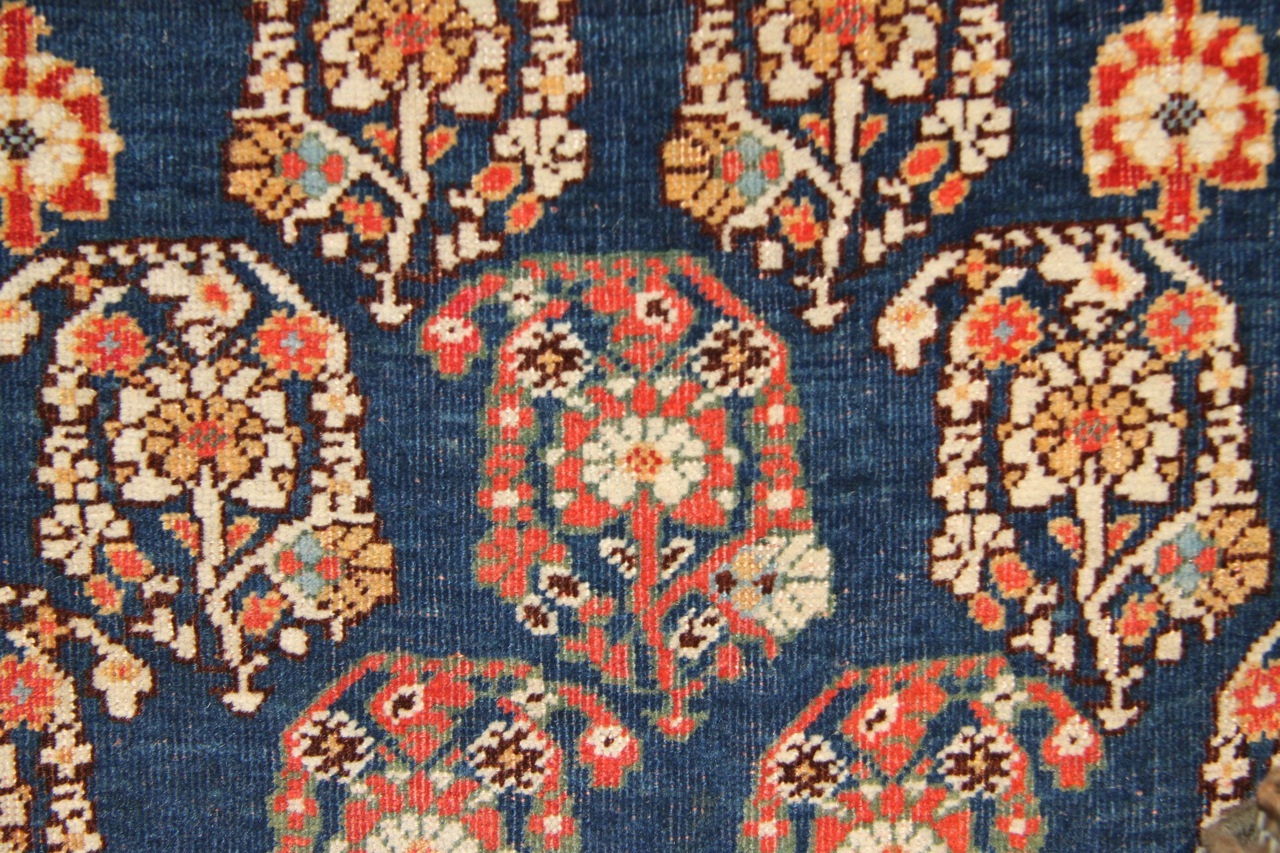 In contrast, town carpets have an altogether very different character. usually of a finer weave, the town carpets always have a more floral design or Persian garden design. Many towns in many countries produced carpets and one of the most respected are the weavings from the City of Agra, some of these Agra carpets were, in fact, woven by prisoners within the jails. ‘Prison’ carpets, as they became known, date back to the era of Mughal Emperor Akbar. In the early sixteenth century he brought some of the finest weavers of carpets from the most respected carpet workshops of Persia to teach carpet weaving to the inmates in the jails of India. Now very highly sought after, these very finely woven carpets were produced using the best quality wool and are therefore incredibly hard wearing. Jail carpets were made in grand, oversized proportions, one of the most famous being carried out upon the shoulders of many servicemen to save it from the Windsor Castle fire in 1992.

Another reason for the two distinct types of carpet design is the constraints of the weaving area. Workshops, specifically built for carpet production, were mainly found in larger cities and could produce very fine pieces. Outside the main towns, carpet production thrived in small villages and also amongst the tribes. From the southern Persian tribes of Quashgai, to the Kurds on the western Iraq border and heading north into Russia over the Caucasus mountains, many tribes had designs of their own which passed from generation to generation and which become instantly recognizable to the collector or admirer. 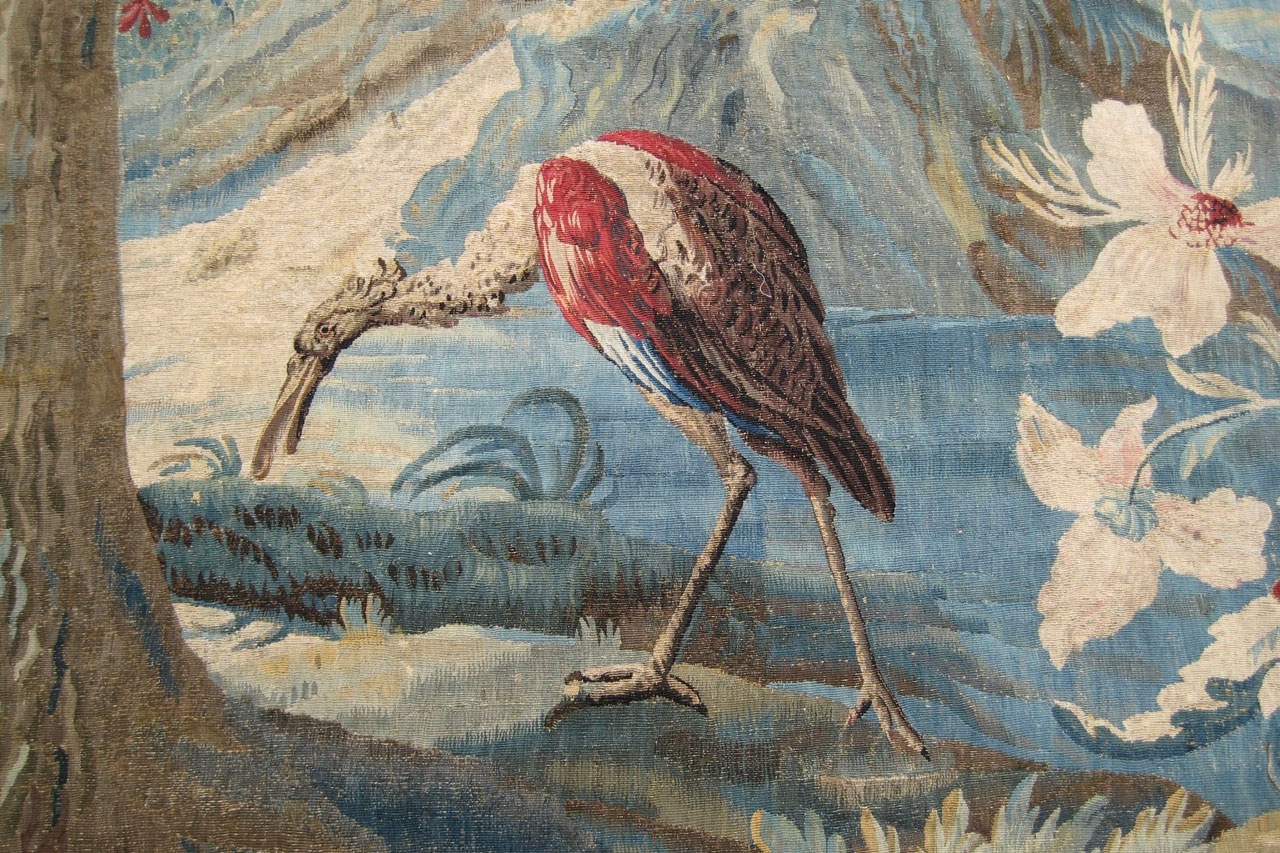 The dyeing process involved individual strands left to dry in the open air, exposing them to the elements. This meant that strands had a variation of colour even when they had been dyed in an identical mix. Dyes used in Persian rugs were obtained from plants, animals and insects and recipes for dyes were handed down from generation to generation within families and tribes. We are familiar with cochineal as food colouring for baking, but for centuries the bright red cochineal insect was a staple ingredient in many Persian carpets. The Kermes insect, found in the bark of oak trees, also produced a red hue and is where the word ‘crimson’ originated. A common Persian plant, madder, provided shades of red, pink or violet depending on how it was treated. Blue was created from the indigo plant, a rotational crop, soaked in water to separate the dye from the plant.

Black is seen in antique rugs less frequently because the process of soaking iron shavings in vinegar, used to obtain the dye, has a corrosive effect on wool. Very rare yellows originated from the familiar cooking spices turmeric and saffron. Cultivated saffron produced a pure yellow, and turmeric root yielded a lighter yellow. An ingredient that is less familiar to us is the mulberry bush. A fungus that grew on the bush was the source of a green-yellow. Other shades were produced by mixing combinations of these with other natural ingredients. For example, brown came from mixing madder with yellow and green walnuts, although this had a tendency to fade as it aged. The very best weavings could also contain substances as exotic gold and silver thread, although these were reserved for the courts and palaces or as gifts for the rulers of neighbouring countries. It is often said that all carpets are perfectly imperfect. Slight inconsistencies show that a rug was woven by hand, moreover the weaver may make an intentional mistake, in line with the belief that only the Supreme Being can make something that is perfect.

Click on the icon to save your favourite carpets & rugs to view again later on. You can print and share your lists too.