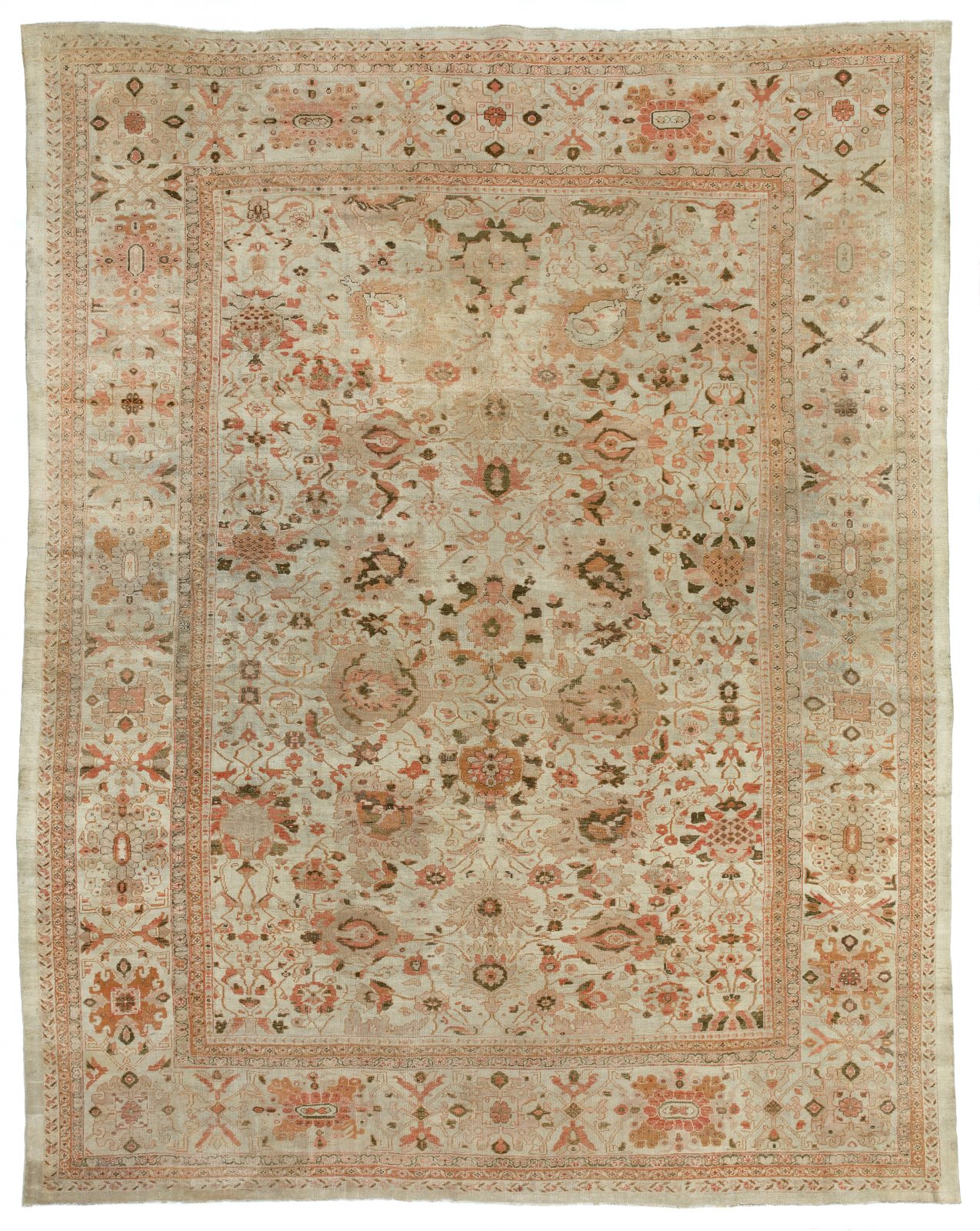 The rarest type of antique Ziegler carpet from the coveted and world renowned Ziegler & Co workshop.  Being the most desirable type with an ivory wool background and ivory border, in this huge oversize.   Preservation and restoration has taken place on this superlative oversize carpet.  With repairs undertaken to the highest order where required, but sympathetically done to convserve the beauty, value and rarity of this carpet.  The gentlest of faded palettes with delicate muted pinks, faded reds, olive greens, on an ivory to grey toned background.

Undoubtedly one of the best pale Ziegler examples we have seen in over 30 years, this carpet epitomises the grace and elegance of the Ziegler & Co workshop and what they achieved in creating over 130 years ago.

Available to be privately viewed at home, by requesting a home visit, you can choose a convenient day and time for us to bring this carpet to you.  We travel nationwide showing our carpets to private customers and interior designers, it would be a pleasure to help you.

Alternatively arrange a visit to our barn showroom, we are open Monday to Saturday by appointment.

The history of Ziegler carpets: In 1883, Ziegler and Co, of Manchester, England established a Persian carpet manufacture in Sultanabad Persia, which employed designers from major western department stores such as B. Altman & Co of New York and Liberty, to modify 16th- and 17th-century Eastern designs for the more restrained western taste. Using highly developed dying techniques, and the best artisans from the region, the Ziegler Co created rugs with beautiful, all-over patterns and with softer palettes than their vibrant Persian counterparts.

Ziegler & Co a Manchester-based Swiss producer was a genius in creating the worlds most desirable and decorative carpets. Using wool from Manchester, UK he had workshops in Sultanabad and supplied Liberty and Harvey Nichols.  Ziegler & Co were instrumental in shaping how decorative carpets would be produced in Persia and what designs would be woven in Sultanabad for the next 50 years. The company’s designs were essentially Western versions of finer Persian designs,  their large scale floral designs and often enormous sizes were modified to the specifications of Western retailers.  Most of the Ziegler production was shipped to New York and London.

Ziegler rugs developed an almost immediate following, especially among early collectors, which included the Guinness family, who laid them in Elveden Hall, their Suffolk estate.

Ziegler & Co employed designers from major western department stores such as A B. Altman & Co of New York and Liberty, to modify 16th- and 17th-century Eastern designs for the more restrained western taste. Using highly developed dying techniques, and the best artisans from the region, the Ziegler Co created rugs with decorative all-over patterns and with softer palettes than their vibrant Persian counterparts.  Taking the small intricate patterns of finer Persian carpets and enlarging the floral motifs to use on these Ziegler’s.  Their following and popularity with the best interior designers throughout the world has seen them stay at the top of the industry since they were produced.

We have found more carpets like "Rarest Antique Ziegler carpet"