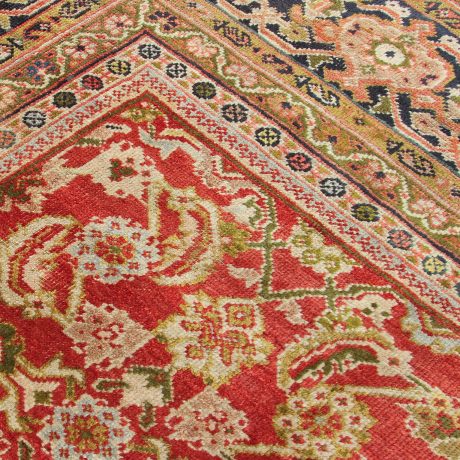 A stunning antique Ziegler carpet from Sultanabad woven in Persia dating from 1880-1890.  The wool pile is in excellent condition with subtle muted reds, greens and gold tones. The classical all over design is a famous carpet design called the ‘Herati’ pattern, this consists of two stylised leaves around a flower which in rare early museum carpets from the 16-17th century was originally two fish around a water-lily.

This beautiful oversize antique carpet is in outstanding original condition, ideal for a drawing room or dining room to scheme furnishings around or to place in a current scheme.

Request a home visit to view this stunning antique Ziegler carpet in situ at a convenient time, we travel the length and breadth of the UK showing our inventory in customers homes.