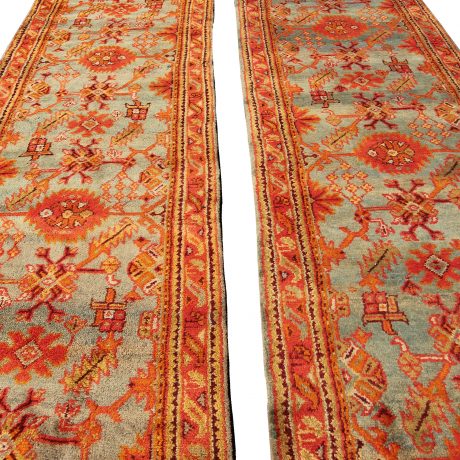 Probably commissioned for a large home in the late 19th century, they have been used but well looked after.  Their pile is thick and glossy, with soft wool you would expect from these densely piled antique Turkish runners.  The weave on Oushak rugs is generally rather coarse using bigger knotting than Persian rugs.  This amazing collection is extremely rare, we have never seen a collection of six antique runners in over 30 years.

Oushak runners, carpets and rugs or Ushak depending on the spelling preference, were woven in Western Anatolia which was one of the largest rug production areas since the Ottoman Empire.  Their designs tend to be more open than Persian rugs and soft dyes are not uncommon.  Often younger Ushaks or Oushaks will be rich red in colour and use bolder geometric designs.

These Anatolian runners have an almost contemporary feel to them and would work in a modern space as well as traditional.  Ushak rugs, runners and carpets were woven in the Anatolian highlands south of Istanbul where they used extremely soft wool and using the larger Turkish knot made them weave more open designs than Persian carpets. They are increasingly desirable today due to their often softer palette than antique Persian carpets, thus making them easy to place in a drawing room or under a dining table.

We offer the service of viewing any of our carpets & rugs in-situ in London, Surrey, Hampshire the UK & Europe by appointment.  Contact us to request a home visit, we would love to show you this rare collection of six antique runners in situ.

We have found more carpets like "Collection of Six Antique Ushak runners, Anatolian"